Today’s Giprosintez is a state-of-the-art company using advanced hardware and software to implement integrated design of industrial and civil facilities for the chemical, petrochemical, oil refining and energy industries, and offer the entire design package from basic design to construction management.

Mina, a young graduate of the Moscow Institute of Chemical Engineering, arrived in Stalingrad on August 1st, 1957 by train from Kharkov. Classified institution (‘mailbox’) 3092 was her graduation distribution choice. She started career on August 2nd as a mechanical engineer and retired in February 1993, after almost 36 years of sharing her design engineer skills with the institute.

Two weeks later, another graduate of the Moscow Institute of Chemical Engineering, Oleg Stuzhuk, came to Stalingrad. They were the first to join the Stalingrad branch of classified institution (‘mailbox’) 3092 upon request for young specialists. Mina and Oleg started working together, became friends, fell in love, and got married.

In 1957, the design documentation team grew into a design organization. They worked in two three-room flats on the fifth floor of a former residential building. The mechanical & process department, the most staffed at the time, occupied two rooms. Boris Kamenko, head of the department, had his office in the former kitchen. Mechanics team comprised of Anatoly Sukhorutchenko (team leader), chief engineers Susanna Belodvortseva and Rimma Barykina, and engineers Yury Nemtsov, Vadim Aleksandrov, Tamara Klopova, Yevgeny Yefanov, and Zoya Gnedash. It was in that room where Mina Stuzhuk had her first workplace. The other room was given to the team of process engineers and instrumentation engineers led by Aleksandr Karapetyan.

Besides, there was the structural engineering team led by Nikolay Sviridov, and the civil, plumbing & master plan team led by Vsevolod Yaskelyain.

Raisa Chegayeva was in charge of drawings duplication by means of tracing paper and drawing ink. The colleagues then double-checked the traced drawings, made amendments if necessary, and handed them on to multiplication, responsible for which was Nina Kadushkina. She used as tools a glassed wooden frame, photosensitive paper, electric lamps, and sunshine on sunny days. Ancillary services and units were also there to support the design institution’s operations. In 1957, the mechanical & process department was mainly busy with restoration of the plant’s buildings and workshops.

The members of the team, wherefrom Giprosintez originated, were good friends who helped and supported each other. As their numbers increased, they kept and improved the team spirit. It was particularly evident on missions to construction sites of new facilities. The design engineers had free access to operating workshops to see the equipment and instrumentation, which was very helpful and contributed to their professional growth.

Based on memoirs of Mina STUZHUK. 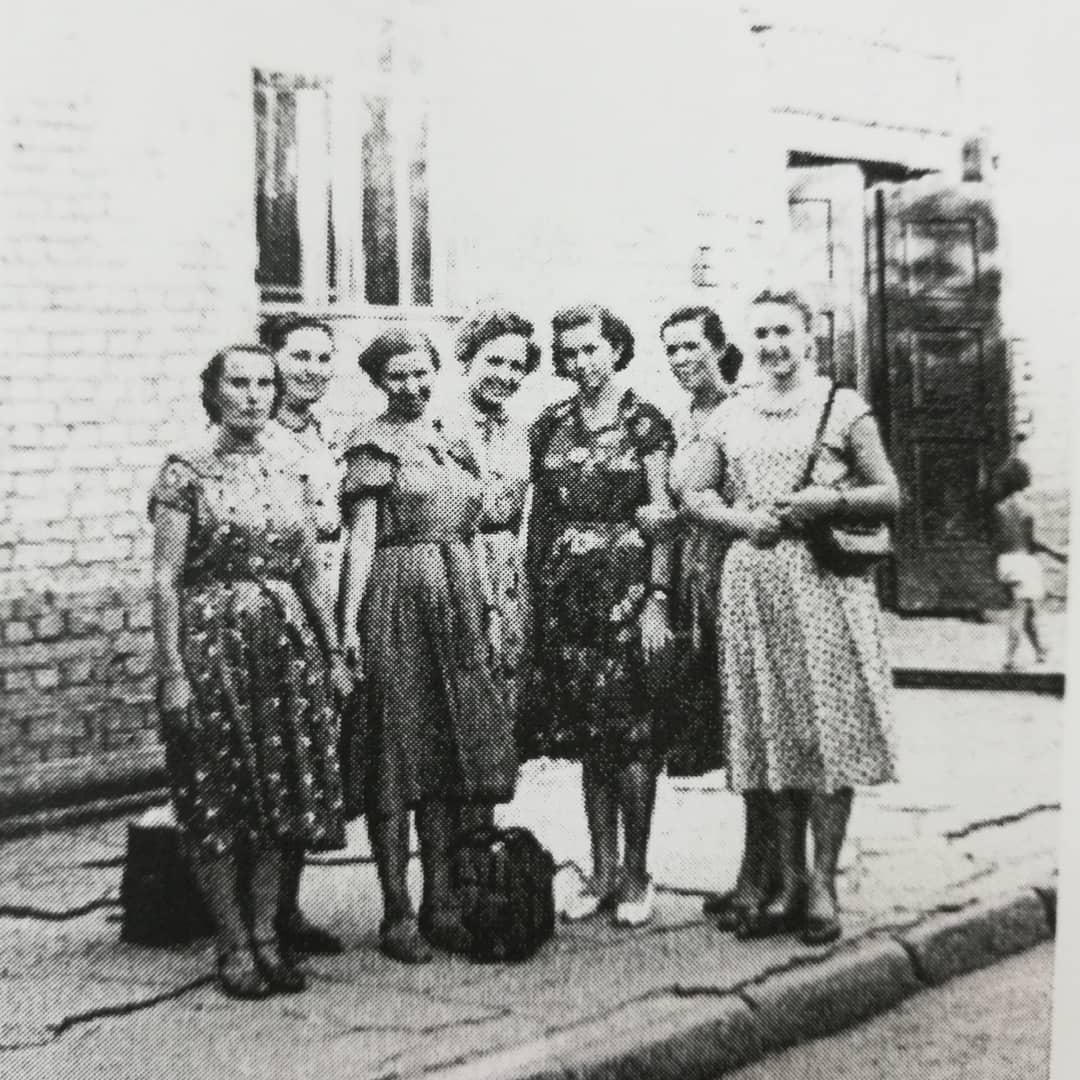 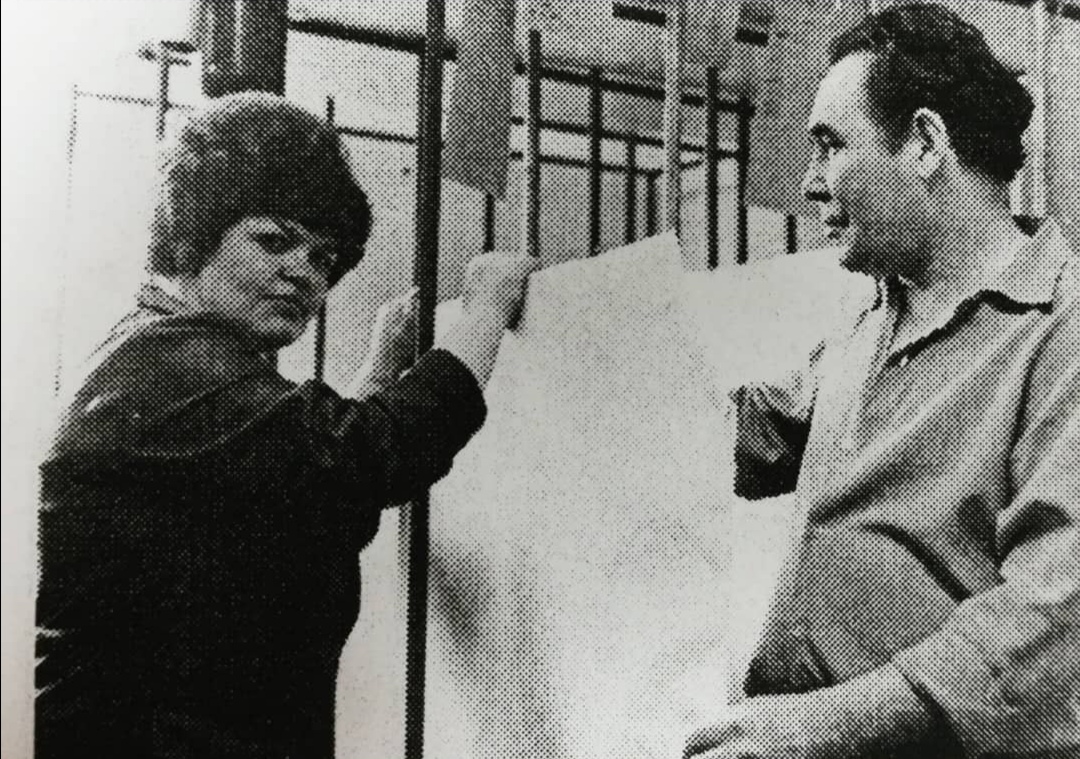 In early spring 1955, the engineering design team worked in a specially equipped room at the top storey of a residential building known as building No. 214.

The five-storey building was located outside the premises of the Chemical Plant.

On 1 October 1956, the team became a unit of classified institution (‘mailbox’) 3092. This is when the decision was made to get a dedicated building.

In November 1961, the unit moved to a new building on 30 Raboche-Krestyanskaya street.

As times went by, the professional expertise increased together with the number of employees. The building was becoming too small to accommodate the growing company. Besides, in May 1969 the engineering unit was reorganized into a self-sufficient Giprosintez Institute. Shortage of working space was becoming an issue again.

The construction department received the task to design the right wing for the existing building. V. Yaskelyain was appointed chief engineer of the project. All the departments – construction, plumbing, general layout, electrical, heat engineering, instrumentation, and cost estimate – contributed to the design.

The building was put in operation in 1970. This is where Giprosintez has been ever since.

Based on the memoirs of Vsevolod Yaskelyain (with Giprosintez from 1952 to 1980, career - from team leader to project chief engineer). 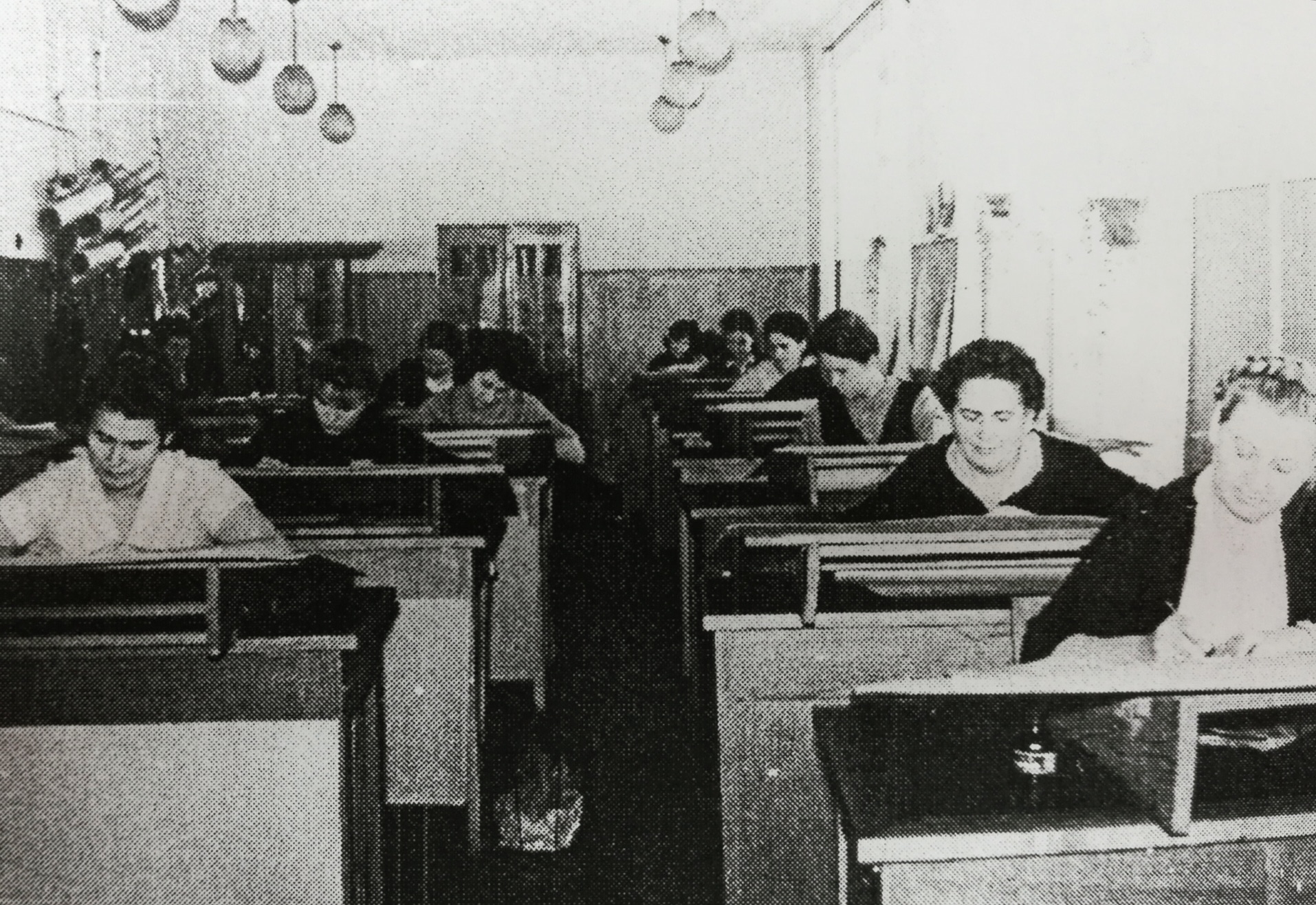 September 1st, 1957 marked 5 years since the design team, the forerunner of Giprosintez Design Institute, had been formed. No gaudy celebrations took place; instead, all the team members were given cash bonuses corresponding to their salaries. Mina Stuzhuk, an engineer, received her first salary of RUB 900, which was then a considerable sum. Most people made enough to afford, in addition to food and other basic expenses, a couple of pieces of clothing (at the time, a pair of shoes cost RUB 150 to 200, and an in-vogue trench coat made in China, about RUB 190). Near five-story apartment buildings, one could almost daily buy some fresh sturgeon (RUB 10/kg) and caviar (RUB 10/half-liter). On the nearby Beketovsky market, fresh and smoked fish, meat, fruit and vegetables were sold in abundance (all prices – as before the 1961 monetary reform).

The living conditions were far from perfect. Engineers lived in quadruple rooms of a hostel. The only temperature controls available in the hot summers and autumns were draughts and humidification.

Soon the first batch of drawing boards arrived. The mechanical engineers received five drawing boards, which marked the beginning of the technical progress in our engineers’ work.

It was clear from day one that chemical engineering design requires combined efforts of several engineering disciplines. The colleagues often argued whether building is more important than production technology, or vice versa. Truth is born in an argument, proving which are the production facilities built according to the team’s designs both in Russia and the former Soviet Union countries.

As years went by, Giprosintez diversified from engineering design to field supervision, commissioning, and startup assistance. It was an excellent school of professional experience that released a generation of skilled design engineers. On the basis of design packages developed by Giprosintez Design Institute, a lot of production plants were built at the chemical facilities Khimprom Volgograd, Kaustik Volgograd, Khimprom Cheboksary, Pavlodar Chemical Plant, Kremniypolimer Zaporozhye, and others.

Based on memoirs of Mina STUZHUK, 36 years with Giprosintez (1957 to 1993), progressing from engineer to lead specialist of the Marketing Department. 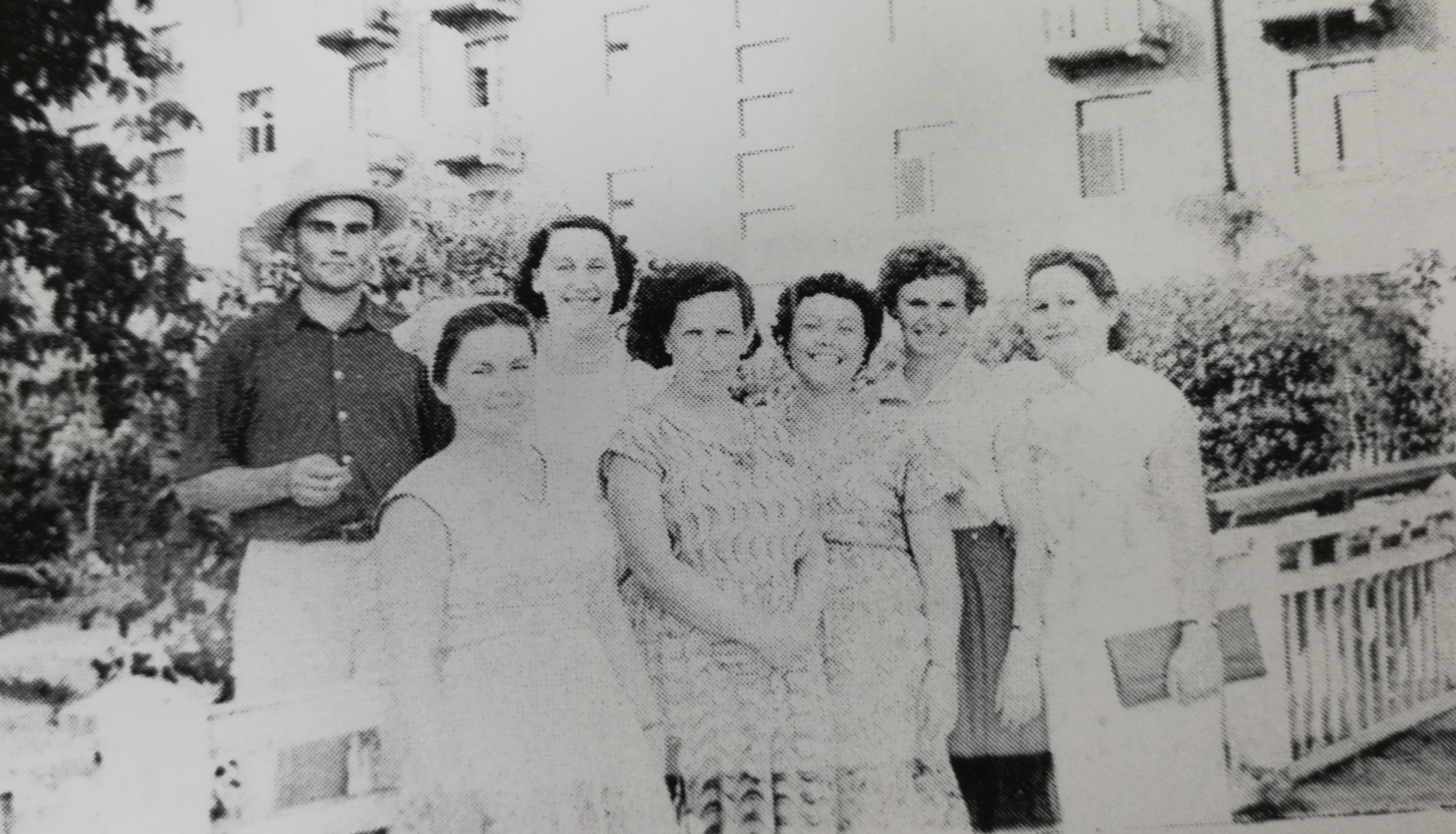 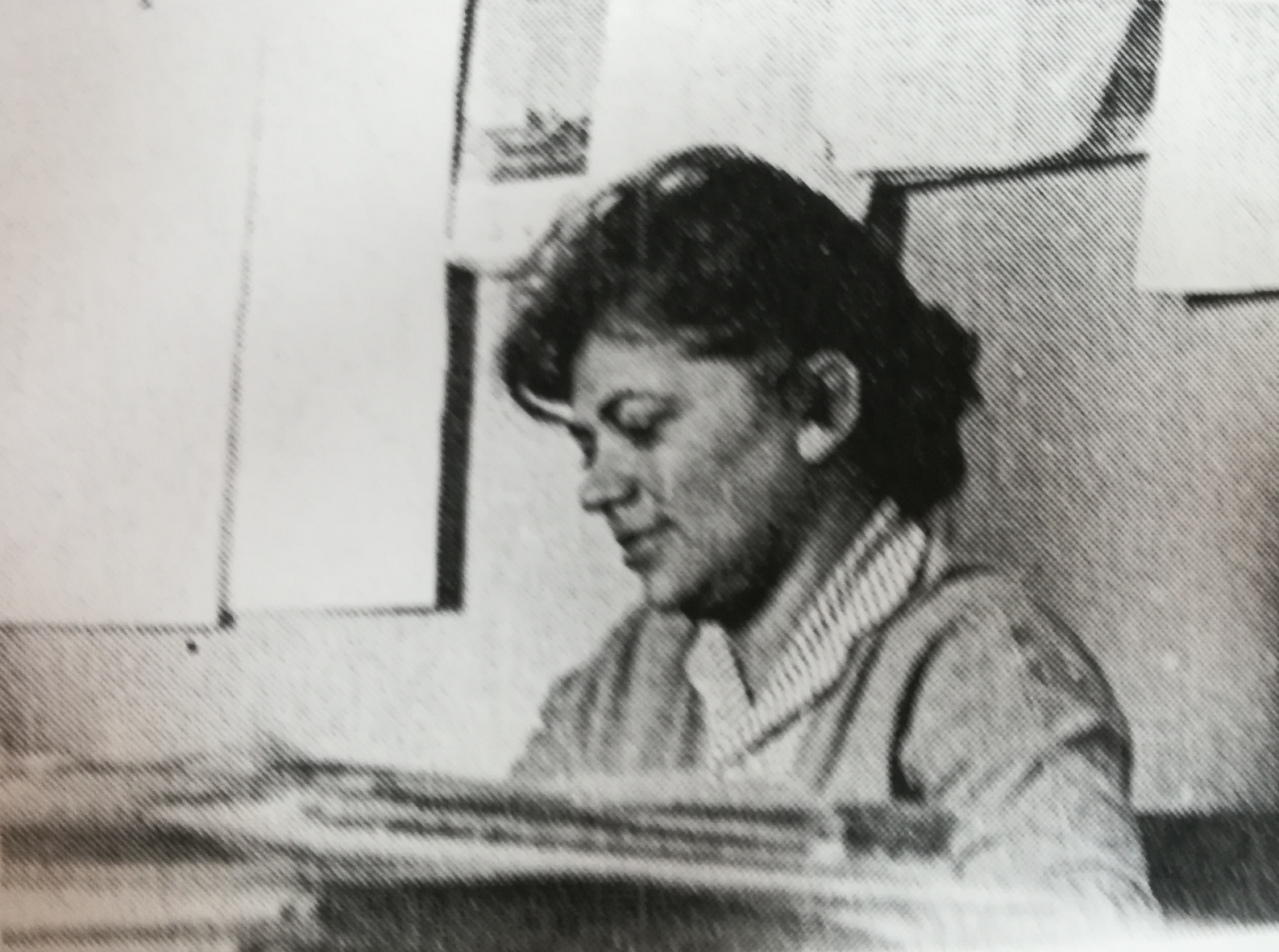 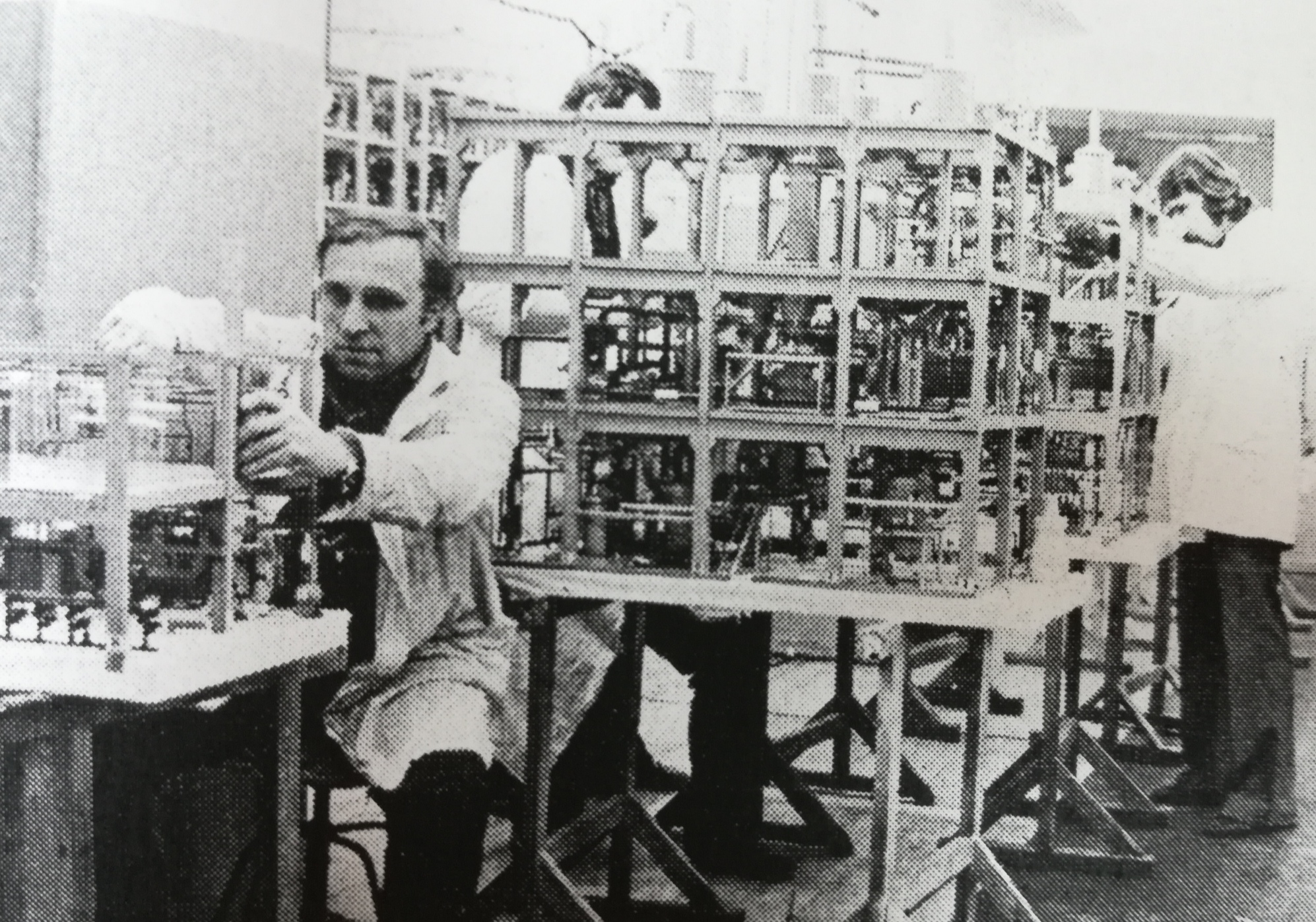 Based on the memoirs of Vsevolod Yaskelyain (28 years with Giprosintez, from 1952 to 1980, career - from team leader to project chief engineer).

The team worked in amenity spaces of the chemical plant’s workshop No. 11. Despite the parcels of drawing tools, triangles, rulers and arithmometers arriving from Moscow, the engineers were in a continuous need of implements. Mr. Gushansky, a shop supervisor, gave the engineers a few sheets of plexiglass and rigid PVC, which proved very helpful. Anatoly Sukhorutchenko spent his free time crafting triangles and rulers out of the material.

The parent institute in Moscow helped by providing equipment and sharing experience. All team members could enhance their professional skills by taking training and probation in Moscow.

The team’s first major job was a worker dormitory design project. Initially, the plan had been to convert into a dormitory a semi-finished reinforced concrete industrial building. The construction of the building, however, was suspended when the World War II began. During the War, the building was shelled and had its southeast side destroyed.

In charge of the architecture and civil design were three team members, V. Yaskelyain; L. Kotyuk, an architect; and A. Gladkov, an engineer. The young engineer Irina Fastova designed the plumbing, and A. Petrov did the electrical engineering.

Late in February 1953, the team was happy and proud to complete and hand over their first major project.

The second project completed was the lime kiln charge lifter design (building 143). In March 1953, Georgy Bednyagin stepped in as the team leader.

Th/pe workload was consistently growing and the number of projects increasing.

A most memorable event was the construction of an extension to a building according to the electrolysis building No. 138 extension design developed by the team. The building had a 10 m span. The extension’s roof was made of I-beams overlaid with precast reinforced concrete slabs. The work that was going on as planned was suddenly suspended as some doubts arose as to the roof beams’ strength. G. Bednyagin summoned V. Yaskelyain and A. Shubnikov, Head of Technical Department, to verify the design calculations. The calculations double-checked, the designers climbed the roof. A. Shubnikov inspected the roof, called over G. Bednyagin and V. Yaskelyain, and started hopping in place vigorously. ‘The structure is strong enough and will last’, concluded then Mr. Shubnikov. The extension was finished and successfully operated after that. 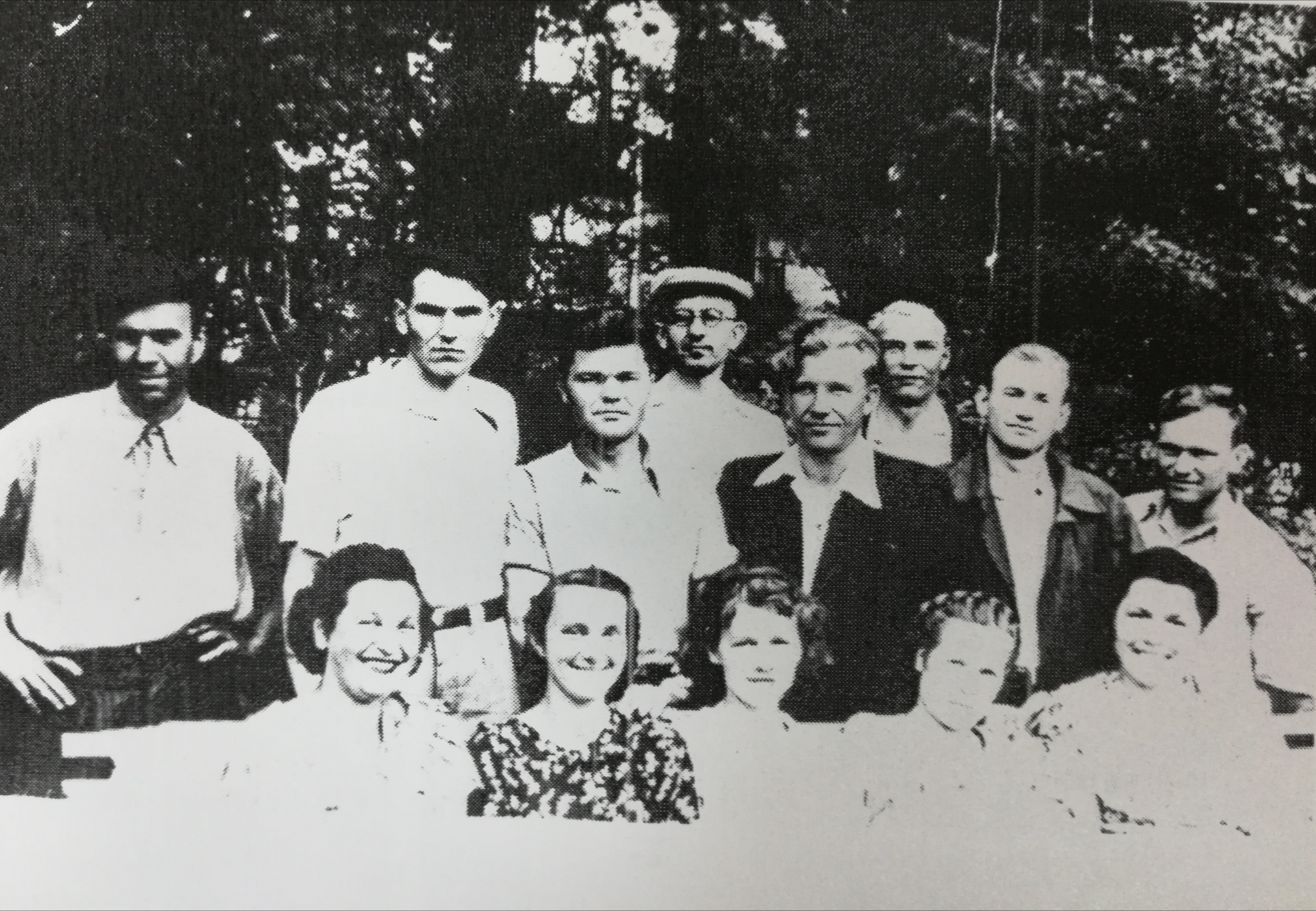 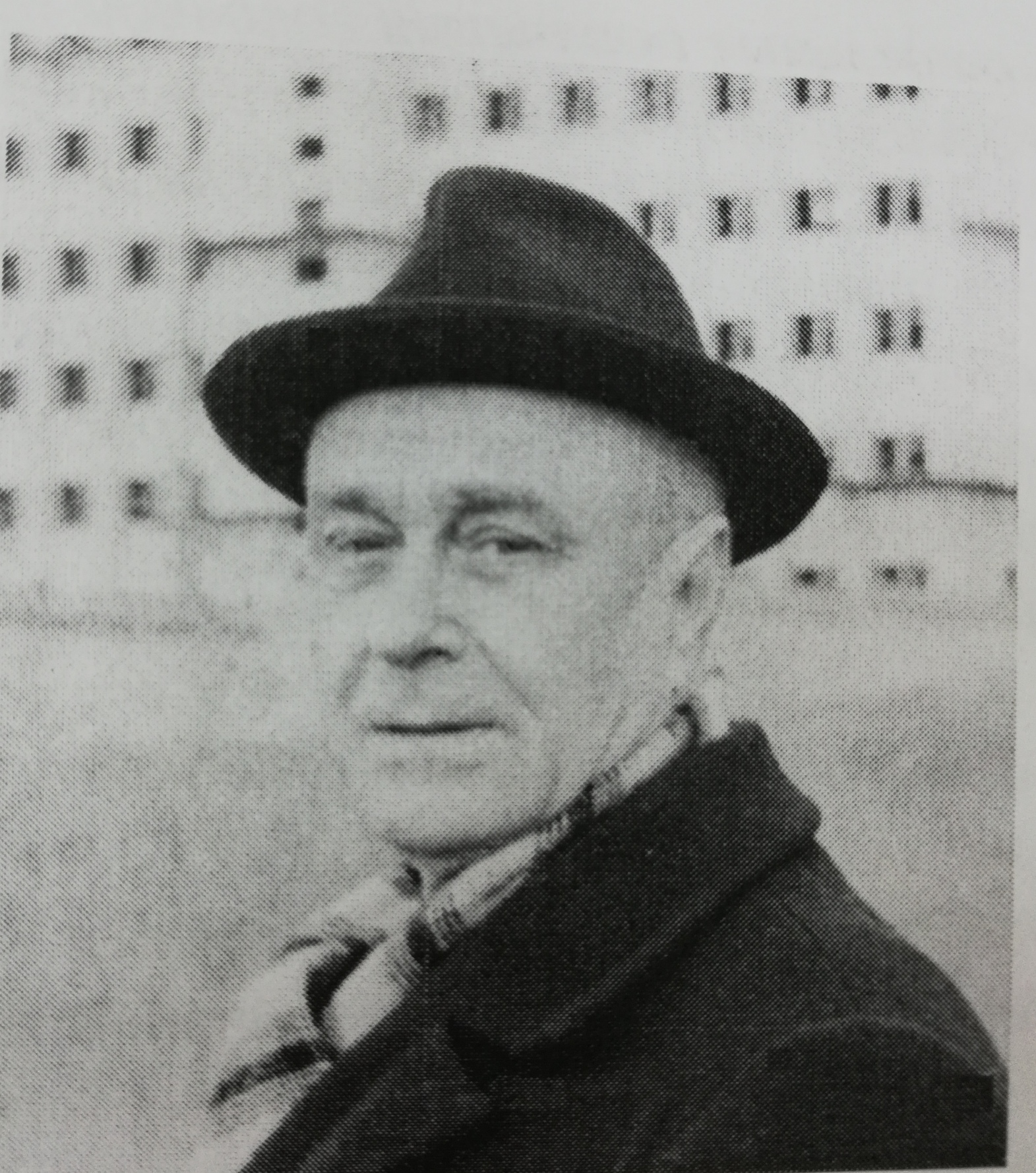 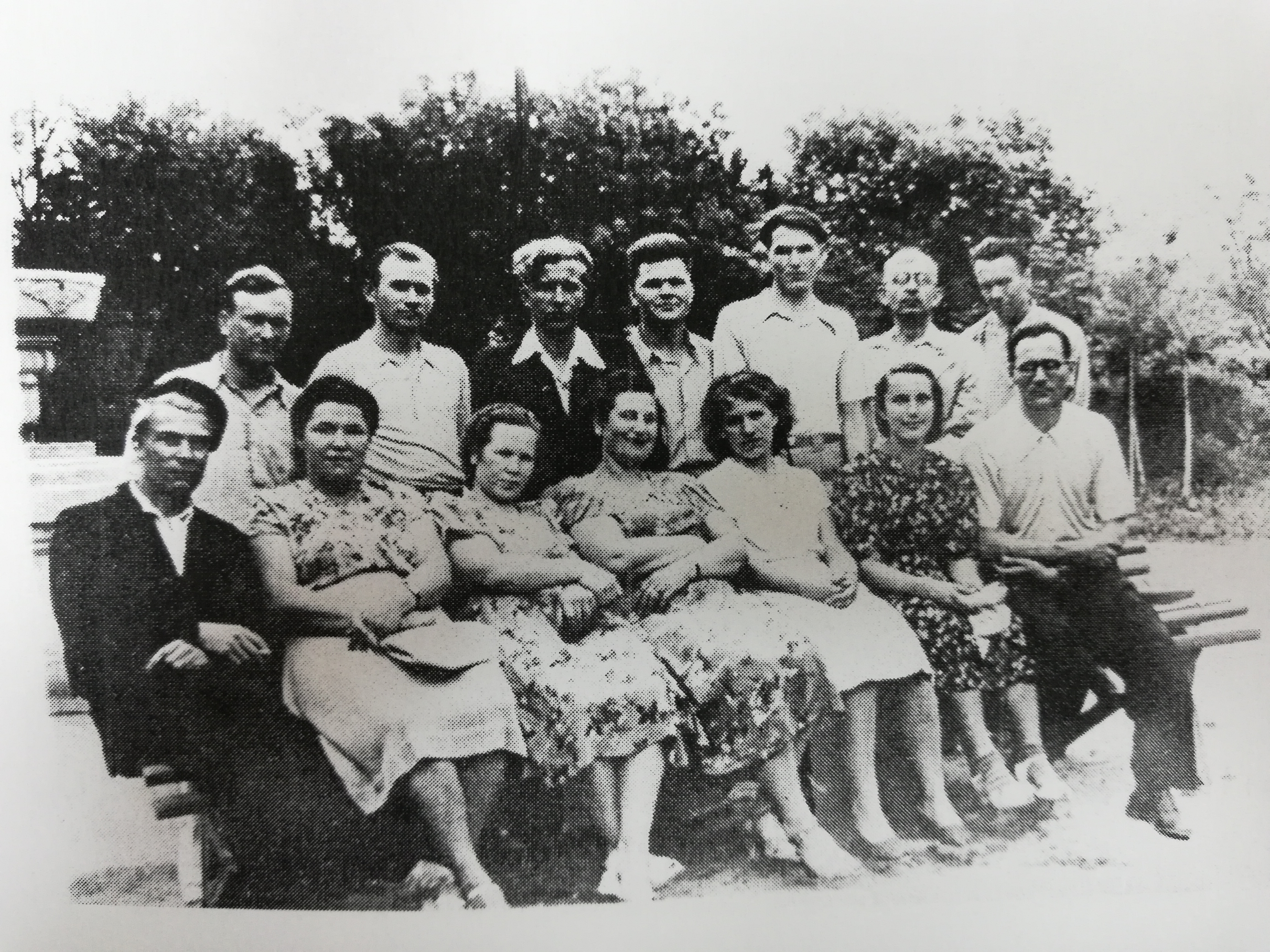 Today we are remembering the past whereby our present and future are defined.

In 1952, a mission from the parent design institute in Moscow visited the im. Kirova Chemical Plant. A meeting of the engineering design department was summoned to consider the outlook and decide on the necessity of setting up a branch design institute or a professional design team. The following day, Susanna Belodvortseva, Irina Khomutova (Fastova), Raisa Chegayeva and Anatoly Sukhorutchenko gave their consent to join the project. V. Konovalov, an experienced chemist, was appointed team leader.

The im. Kirova Chemical Plant allocated a three-room space on the second floor in operating workshop No. 11. The rooms were depressingly dilapidated and neglected, but these were the only rooms available. The windows, doors, floors and walls were crying for renovation. All the team plunged into the extensive overhaul that had to be done concurrently with the engineering design jobs assigned to them by the parent institute. The new design team’s members initially had no proper office desks or chairs. They had to do their work sitting on window sills at creaky tables. The fifth team member also received a window sill for a workplace.

The tools, such as rulers, triangles and T-squares, were hand-made. One day the team found in shop No. 2 an old German drawing board and immediately had it delivered by truck to their office. Given that the engineers had had to use makeshift boards and T-squares moved by means of rollers, the professional drawing board proved very helpful. The rollers for the drawing appliances were bought with the designers’ own money.

It was a really tough time. Some resigned, unable to stand the hardships. However, those who found it in them to live through the initial difficulties have become part of the company’s history. 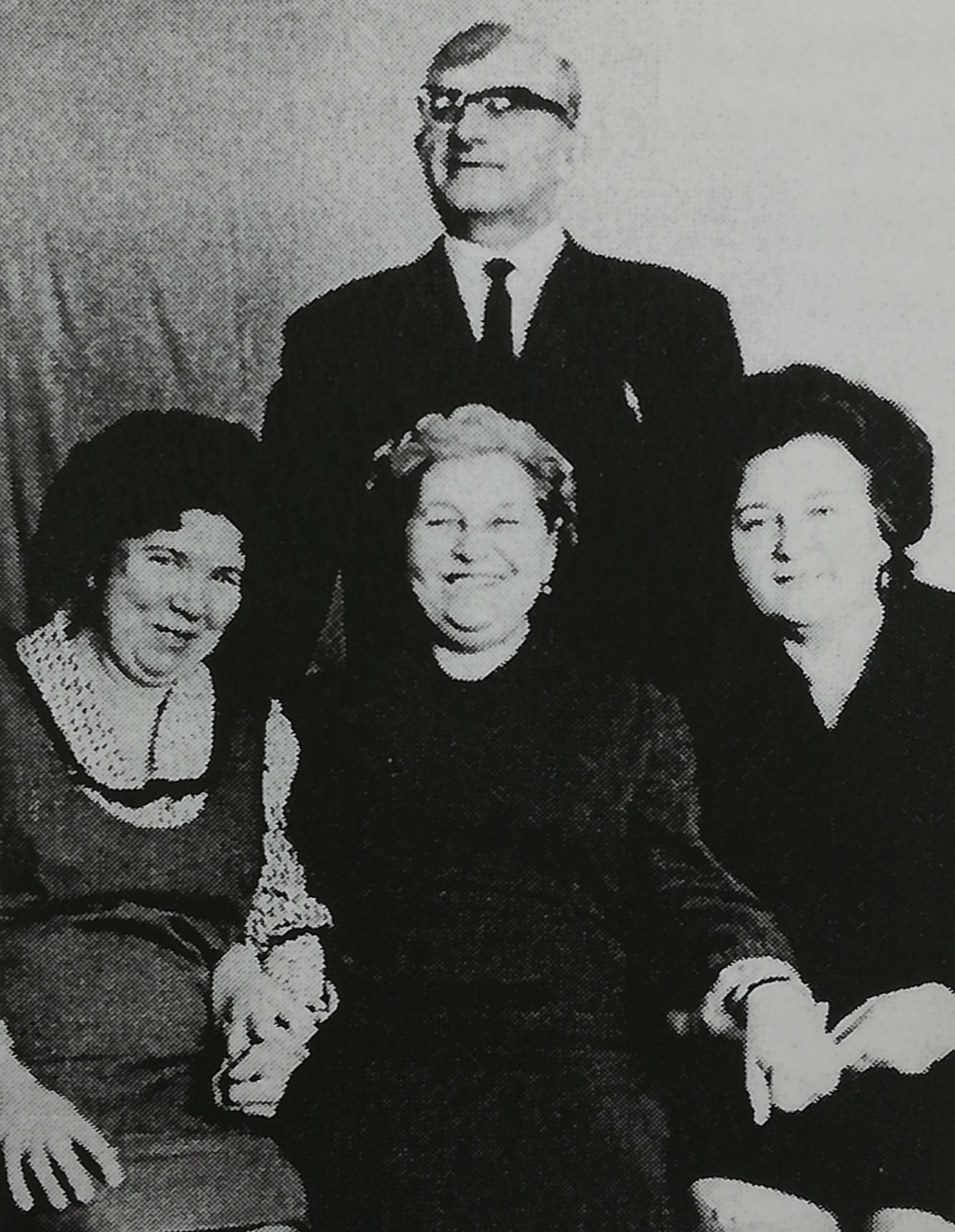 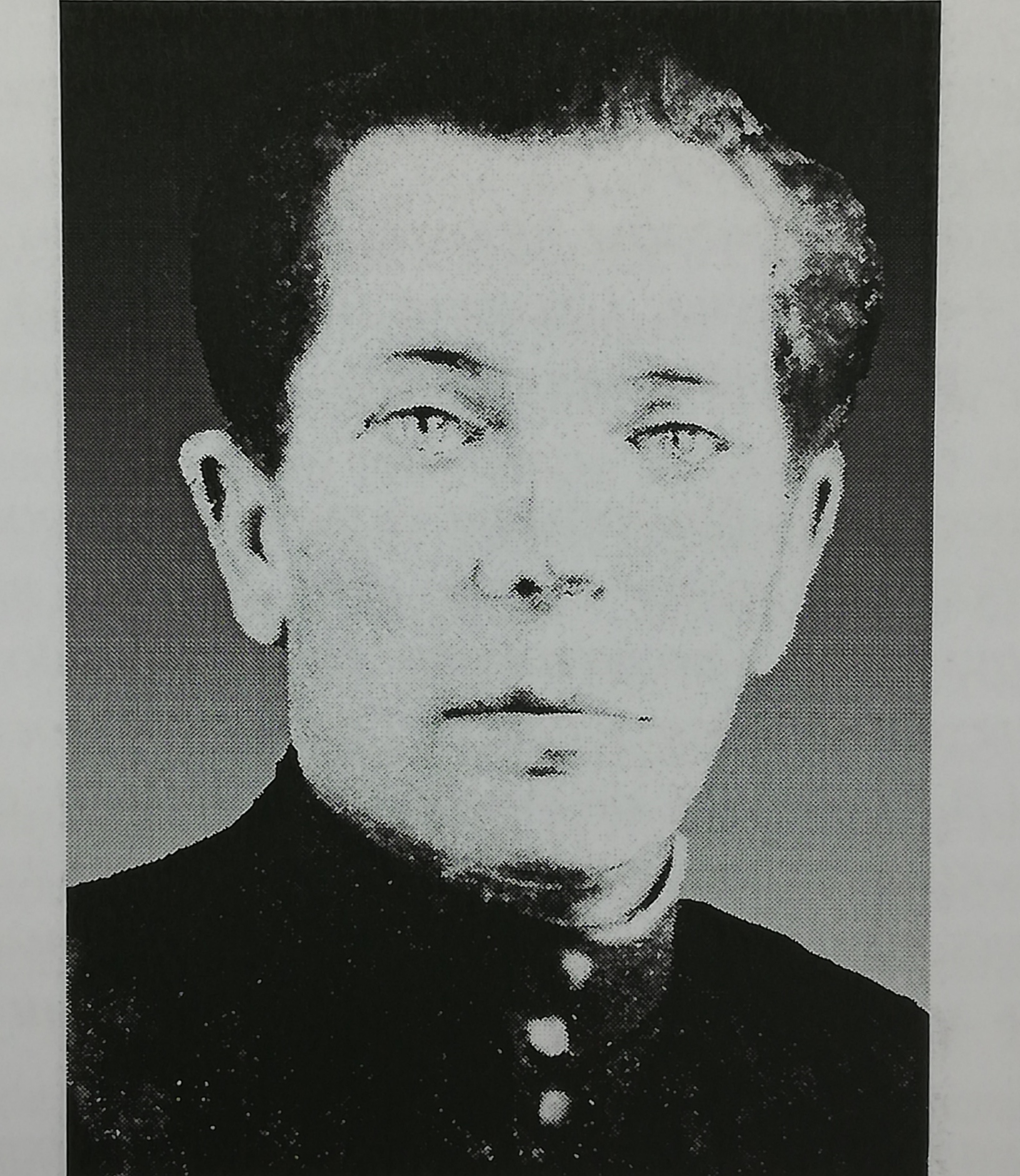 — Giprosintez issues the first design package made with the help of 3D design practices and 3D intelligent model.

— Order of the Ministry of Chemical and Refining Industry of the USSR appoints Giprosintez General Designer of chemical weapons destruction facilities.

— Giprosintez is awarded the Order of Labor Red Banner for contribution to developing large chemical facilities and industrial complexes.

— the group receives the status of design team;